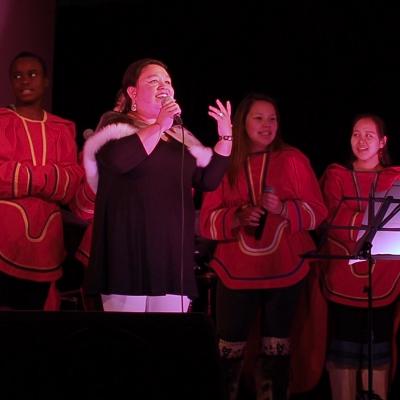 Looee is an Iqaluit-based, award-winning Inuktitut singer-songwriter, originally from Pangnirtung, Nunavut. She beautifully blends traditional and contemporary Inuit songs, with inspiration from Gospel and choral music genres. Looee has performed on stages across the Canadian Arctic, equally at home performing solo, in duet with James Arreak or with her band and choir.

Looee, a prolific performing artist in her chosen field, is passionate about Inuit language preservation and creativity. Her music is in constant play on Inuktitut radio and is covered by young Inuktitut musicians who look up to her as a mentor. Her songs are lyrical, full of beautiful sound and capture themes of hope, strength, resilience, playfulness and a love of family and land.

As an author, Looee is scheduled to release novels in the upcoming year. In 2021, she became an artist-in-residence with Nunavut Tunngavik Inc. for winning first place in the Inuktuuqta! Inuktitut Writing Prize, funded by their Nunavut Tunngavik Foundation. She has also recently collaborated with Inhabit Media on an educational children’s book, inspired by her numbers song.

Looee is an experienced designer and seamstress. She was the costume designer for the Qaggiavuut! Society's Kiviuq Returns: An Inuit Epic, which performed across Canada.

2021 - Kuvianattuksovut itigangit (How Beautiful Are the Feet) - Messiah/Complex (Ensemble Album - Against The Grain Theatre and Toronto Symphony Orchestra, conducted by Johannes Debus)
2017 - I Know Who I Am - Composition by Looee Arreak & Laura Hawley for Nipiit Katittut Voices United

2021 - Looee became the Executive Director of the Qaggiavuut Society to continue the organization’s work in supporting performing artists with training and opportunities.

Looee is regularly commissioned to teach Inuit youth in Nunavut communities, and facilitates musical youth training and master workshops, through the Qaggiavuut Society. Her workshops centre around choir, singing and Inuktitut songwriting.

Live concert: 'I Know Who I Am' / 'Qaujimavunga Kinaummangaarma'
Facebook Page