The first performance is on December 12. A concert and a conversation, Kiinalik: These Sharp Tools is the meeting of two people from the north and south of Canada. Inuk artist Laakkuluk Williamson Bathory and queer theatre-maker Evalyn Parry met on an expedition from Iqaluit to Greenland.  In Inuktitut, when a knife is dull, it is said to “have no face”. The word kiinalik translates to mean the knife is sharp – or, “it has a face”. Embodying the stories of their heritage, Evalyn and Laakkuluk put a face to the colonial histories, power structures and the changing climate that lie between them.

Kiinalik is co-presented with Buddies in Bad Times Theatre of Toronto. Laakkuluk won “Best Performer” and Erin Brubacher “Best Director” from the Toronto Theatre Critics Association for their work. Evalyn and Laakkuluk also won “Outstanding New Play” and Cris Derksen and Evalyn won “Outstanding Sound Design/Composition” from the prestigious Dora Mavor Moore Awards in 2018. Iqaluit is the first city Kiinalik will visit on a multi-city tour. On December 12, doors will open at the Koojesse North Room at the Frobisher Inn, at 6pm and performance starts at 7pm. Tickets are pay-what-you-can with a minimum of $20 and are available at House 411 and at the door before the performance. The languages used in performance are English, Inuktitut and kalaallisut.

In conjunction with the rehearsal process for Kiinalik, Qaggiavuut is hosting a mentorship programme for eight Inuit youth to train in all the technical and performative aspects of pulling together Kiinalik; youth will receive one-on-one training in everything from stage management and lighting design to electroacoustic music.

The second play Qaggiavuut is presenting is on December 21: the much beloved production Kiviuq Returns. Back in Iqaluit after a successful run in Nuuk and just before a 32-show run at Toronto’s Tarragon Theatre, Kiviuq Returns is renewed with an all-star cast including Natar Ungalaq, Christine Tootoo, Vinnie Karetak, Avery Keenainak, Keenan Carpenter and Charlotte Qamaniq and directed by Laakkuluk Williamson Bathory. Kiviuq is the eternal wanderer of Inuit stories from across the Arctic. In this retelling, Kiviuq journeys to encounter shape-shifting animals that are enchanting, comical and treacherous. Inuit legends foretell that if Kiviuq dies before he returns home, Inuit will disappear from the earth. Kiviuq Returns is an interdisciplinary performance that brings together traditional and contemporary music, drum dancing and elder storytelling of one man's adventures and sorrows through the ages. On December 21, doors will open at the Koojesse North Room at the Frobisher Inn, at 6pm and performance starts at 7pm. Tickets are pay-what-you-can with a minimum of $20 and are available at House 411 and at the door before the performance. The performance is presented in Inuktitut. 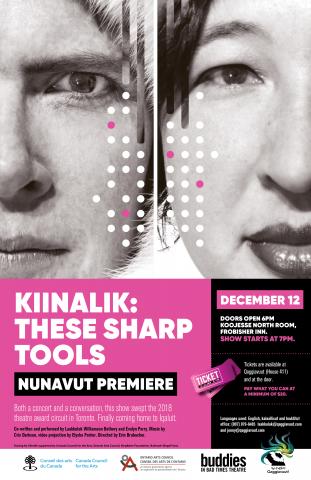 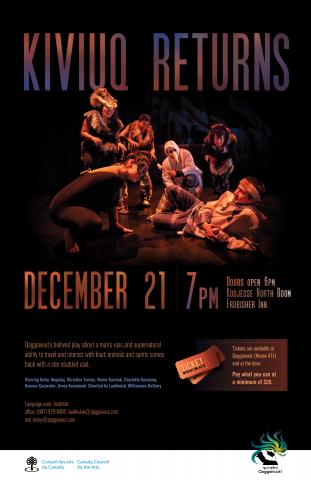